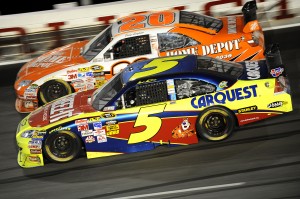 The Sprint Cup series heads to Darlington, S.C., this week for another Saturday night race. Darlington Raceway, affectionately known as the Lady in Black, is an egg-shaped, 1.33-mile track with lots of banking in the turns (25- and 23-degrees, respectively). It also offers an abrasive surface that chews up tires, and narrow, difficult turn exits. Many cars end up sporting the so-called “Darlington stripe” by the end of the night courtesy of the wall at the turn exits.

Our historical data for Darlington is very limited for two reasons. First, the track resists categorization with other tracks. Its steep banks recall Bristol and Dover, but it’s bigger than those two tracks, and its funky egg-shape sets it apart as well. It’s almost as big as the banked cookie-cutter tracks (i.e., Texas, Las Vegas, Homestead, Charlotte, and Atlanta) and features similar banking, but you certainly can’t label this unique track a cookie-cutter.

Second, the series ran at Darlington only once last year, and that was also a Saturday night race with two practices followed by qualifying on Friday. Just like last week at Richmond, that schedule deprives us fantasy players and handicappers a third practice, and more importantly, it makes it difficult to ascertain which cars were fast in race trim because the speed charts reflect those fast in qualifying trim.

It appears the weather will also reduce predictability this week. At press time, Darlington will receive hot sunny weather on Friday, but on Saturday the temps will cool a bit, and even worse, scattered thunderstorms will roam the area. So, on Friday day the teams will set their cars up for a hot, rubbered-in track but then face a cool, possibly clean track on Saturday night. That lessens the value of the Friday data. Oh, and we also must worry about rain causing an early stoppage Saturday night, which could give us a relatively random winner. Trivia question: How did Joey Logano and David Reutimann win the first and only races of their careers? Rain stoppages!

On the bright side, at least Darlington’s pit-road offers more room than the short tracks.

Handicapping Darlington
To get the best handle I can on this week’s favorites, I examined the historical data for Darlington and then Bristol and Dover, and then fine-tuned those results with analysis results from the banked cookie-cutter tracks. Jimmie Johnson rose to the top in pretty much all these exercises, and I feel pretty good rating him #1 so far this week (though I wouldn’t go so far as to call him a “clear favorite.”)

After Johnson, I quickly identified six drivers I liked, but I had a hard time ranking them because in my estimation, they’re all very close. Keep that in mind when reviewing my rankings:

My Yahoo! Fantasy League Picks
In low-predictability races such as this week’s race in Darlington, I lean toward saving starts for my big guns (i.e., drivers I expect to start all nine times this season), and that’s my plan this week.

Group A
As noted above, I like Johnson this week, but I’m leaning toward saving him. I definitely want Biffle on my roster, and I’m torn between putting Martin, Gordon or Stewart into the two hole. I’d like to work Stewart in because like Biffle, I don’t foresee running Stewart nine times this year. I’ll probably activate Gordon, though—he’s a good backup plan in case Biffle stumbles on Friday.

I will likely line up with Newman, Kenseth, Logano, and McMurray.

Group C
The Group C boys look pretty jumbled, unfortunately. I tenatively rate them in this order: A.J. Allmendinger, Paul Menard, Sam Hornish Jr., Scott Speed, Regan Smith. I’ll probably go with Allmendinger and Menard. I’d like to work Hornish in to save a start for those guys, but I don’t know if I can stomach watching him slide around Darlington with my points on the line.