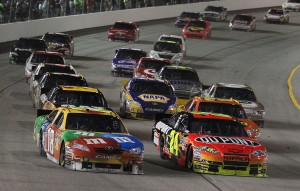 All my favorites in last night’s race ran up to my expectations:

1. Kyle Busch had the car to beat much of the early portion of the race, and then he got past Jeff Gordon on the final restart to win it.

2. Jeff Gordon had the car to beat the second half of the race and came home second.

3. Ryan Newman had a top 10 car all night and finished eighth.

4. Jimmie Johnson had a top 15 car early, but the team improved it throughout. He finished 10th.

5. Kevin Harvick had a top car throughout the night and finished third.

Two surprises: 1) Jeff Burton had a great car as the track cooled, which I didn’t foresee, and 2) Carl Edwards worked his way into contention as well, and I didn’t see that coming at all.

My Yahoo! Fantasy League Picks
Group A
As noted above, Gordon coulda won but finished second. I’ll take it!

Group B
I was happy with Newman’s run, and while Joey Logano didn’t have a stellar night, his 16th place finish is acceptable for a start-saver. I would’ve picked up a few more points with Clint Bowyer (who ran strong all night), but now I have a Bowyer start I can use somewhere else later on this year.

Martin Truex Jr. had way more car than I expected, which had me kicking myself as I watched him climb through the field. Oh well, you can’t win ’em all.

Group C
A.J. Allmendinger was at least top 15-ish all night, and I’m happy to get a 17th place finish from a Group C guy. I also got lucky when I benched Sam Hornish Jr.—he suffered a brutal, race-ending crash late.