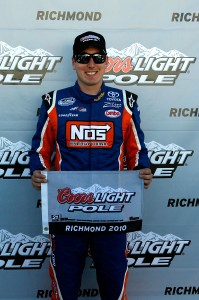 The Sprint Cup teams got in all the practice they’re gonna get for tonight’s race at Richmond, and the preliminary action shakes up my rankings a little. Before I get into the handicapping, though, I’ll go through some of the factors that affect race predictability.

Tires
According to the Goodyear Tire Notes posted on Jayski.com’s Richmond Race Info page, the teams are running the same tire they did at both Richmond races last year. That increases predictability because it means the crew chiefs’ notes from last year’s Richmond races have more value than they would if a new tire was in play.

The Weather
In my Race Preview: Richmond post, I noted that the weather forecast called for steady, clear and warm conditions on Friday and Saturday. That forecast has held true so far, and it appears the good, consistent conditions will hold through tonight’s race.

The Track
The asphalt is now good and rubbered in, and with no rain so far and no rain on the horizon, it appears the teams will face a consistent level of rubber on the track, which is good for predictability.

On the other hand, as I discussed in my Preview, the track will undergo a big  temperature change from the sunny, hot, daytime temps of yesterday afternoon to the relatively dark, cool temps present tonight during the race. In my preview, I speculated this variation would have a big impact on the cars’ race setups (and therefore negatively impact predictability), but now I’m not so sure it will. During Practice 1 yesterday, several drivers gave differing opinions on the temperature change’s impact. For example, David Reutimann indicated it will be a big deal, while Tony Stewart said the cooling track will add grip but not affect the cars’ balance, meaning a hot-track setup will work on the cool track as well.

The Data
The data accumulated yesterday via the practice and qualifying speed charts has less value than I originally thought it would. Why? The Practice 1 and Practice 2 speed charts mostly reflect which cars were fastest in qualifying trim, and because the teams did not practice after qualifying, we don’t have a simple, clear way of gauging which cars are fastest in race trim. The historical data for Richmond is affected by this as well. Bottom line: decreased predictability.

Handicapping Richmond
In my Preview, I rated Kyle Busch just outside my top six, but his performance yesterday vaults him to #1. He was fast in practice, and then went out and claimed the pole, too.

He bumps Jeff Gordon down to #2 in my rankings, but not by much. Gordon was also fast in practice yesterday, and he’ll start fourth.

On the other side of the coin, Mark Martin and Denny Hamlin looked much slower yesterday than I anticipated. There’s a good chance they both are better in race trim than qualifying trim (compared to their opponents), but that remains a bit of an unknown. (I did hear a reporter say Hamlin was working on race trim during Practice 1.) So, I’m bumping them down out of my top five.

Here’s my updated ranking, including the best odds I found this morning at five online sportsbooks:

Bottom line: There’s significant unpredictability in play tonight as noted above and in my Preview, so if you’re looking to lay some money down, caution is the word of the day.

My Yahoo! Fantasy League Picks
Group A
I wish I had Kyle Busch available; if I did, I’d start him. I’ve got Gordon and Hamlin, and Gordon easily gets the nod. Jimmie Johnson will likely run well today, too, but I don’t see a reason to burn one of his starts today, unless you have him paired with Greg Biffle, Carl Edwards, etc.

Group B
I’ll probably start Newman and Clint Bowyer—both looked really good yesterday. I’d really like to start Joey Logano to save a start for one of my big guns, and he was almost good enough yesterday to merit it. If Mark Garrow’s crew-chief notes come out strong for Logano, maybe that’ll prompt me to take the chance on him.

I also like Kevin Harvick a lot, and Reutimann looks to be a nice sleeper.

Martin Truex Jr. will be riding the pine.

Group C
I wanted to start Sam Hornish Jr. tonight to save a start for A.J. Allmendinger, but Allmendinger looked significantly better than Hornish yesterday. Allmendinger will likely get the nod.