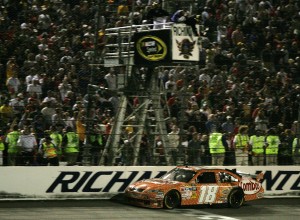 The rough-and-tumble Talladega days are behind us, and the circuit heads to Richmond, Va., for a Saturday night race. Richmond International Raceway (RIR) is a .75-mile track with 14 degrees of banking in the turns, and that lumps it into the short-flat track category (Phoenix measures 1 mile long with 11 and 9 degrees of banking, for example). It typically produces good racing, and from a fantasy or handicapping perspective, it offers fair predictability, too.

We have a decent amount of historical data from Richmond, although the Saturday night schedule squeezes practice and qualifying into Friday, cutting one practice session from a typical weekend (from three down to two). As of this morning, it appears we will have stellar, consistent weather (though slightly warming) on Friday and Saturday, so we should get all the preliminary action in and not have to worry about rain de-rubbering the track and/or stopping the race.

On the other hand, the teams will practice and qualify during warm, sunny Friday, but then race at night on Saturday. I suspect RIR’s asphalt will vary quite a bit in temperature from day-to-night, so setups that are good on Friday might not be so good on Saturday night. In addition, quarters are pretty tight at Richmond on the track and on pit road, and that tends to ramp up the chances of a crash, the number of pit-road incidents and driver tempers.

Handicapping Richmond
I’ve looked over the historical data from Richmond and recent races on the other short-flat tracks on the Sprint Cup circuit (i.e., Phoenix, Martinsville, and New Hampshire), and the same names rose to the top no matter how I looked at the data. I therefore feel good about this top six:

Gordon is the clear favorite so far. Martin, Johnson and Hamlin are bunched pretty tightly together.

We’ll know more after practice and qualifying on Friday. We’ll also know by then whether Goodyear is bringing a new tire to this race, or the same as last year.

My Yahoo! Fantasy Picks
Group A
As noted above, Gordon is tops in Group A so far. I’ll probably tab Denny Hamlin, too, primarily to get another manufacturer in the mix in case the Hendrick boys miss something on the set up (or the Gibbs boys find something).

Group B
Newman is a lock for me this week, as is Clint Bowyer.

After that it gets interesting: I actually rate Joey Logano #3. I’ve shied away from Logano throughout his brief Sprint Cup career because his numbers have failed to match the hype. It appears he’s getting it together, though, and more importantly for us fantasy players, his numbers deserve attention this week.

Group C
Sam Hornish Jr. stands above his Group C brothers in this week’s historical data. A.J. Allmendinger isn’t too far behind, and then it’s a bit of a jump to Scott Speed.

Joe Nemechek looks fair-to-middlin’ as well, which surprised me—I can’t think of Front Row Joe ever making my cut. I’d hesitate to run him, though, unless you know he won’t do the old start-and-park routine.