Practice and qualifying are in the books, and we now have a much better handle on who will run well at Talladega today. Right? Umm, no, unfortunately.

If you look at the practice speed charts, the cars at the top are the cars that just happened to run fast while practicing running in the draft. Those numbers come from a relatively small number of laps and don’t provide much of a window into what will transpire during the 500 mile nail-biter. Qualifying was rained (hailed?) out, so we don’t even know which cars have the most total speed.

The teams will run the same tires as last year, so that’s one variable we can eliminate. Though I get the impression running a different tire wouldn’t have had a significant impact anyway—grip is not really a problem at ‘Dega.

The rain likely de-rubbered the track, but again, I don’t think that’s a big deal, either. At press time, it appears rain won’t be in the picture today, so we shouldn’t have to worry about a rain stoppage.

Handicapping ‘Dega
Beyond those factors, I did pick up a few noteworthy items from the Practice 2 telecast and some articles/posts I’ve read online. I term this stuff “soft data,” though—use it with caution and restraint! 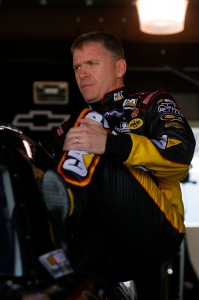 Burton enters his car at Martinsville. He looked strong in Practice 2 at Talladega. Could he have something for the race? (Photo Jason Smith/Getty Images for NASCAR)

First, I didn’t really have Jeff Burton on my radar this week, but he was up front throughout Practice 2, drafting with multiple folks. Plus, he has a reputation as a pretty steady guy in the draft, so I came away feeling pretty good about his chances today.

Carl Edwards complained of a vibration in his car, and the team seemed unable to track down the source (not even swapping out the transmission solved the problem). Unless you know they later fixed this, I recommend shying away from the 99.

Ryan Newman was knocked loose during Practice 2 and whacked the wall. He’ll go to a backup car. When the pit-road reporter asked him if the backup car was as good as the now-wrecked primary car, Newman bluntly said, “No, that’s why it’s the backup car.”

Also, the Fords will finally deploy the new FR9 engine, which reportedly makes more horsepower, weighs less and runs cooler than the old engine. If true, that could give the Fords a boost today, but 1) it’s unverified info, and 2) 500 miles at 200 mph will provide a stern test of the powerplant’s ability to go the distance.

The following drivers didn’t get on the track during Practice 2: Scott Speed, Brian Vickers, Regan Smith, David Reutimann, Jeff Gordon, Jamie McMurray, and Juan Pablo Montoya. I speculate that means they felt their cars were good enough that they could avoid the risk of participating in Practice 2. If true, that’s a good sign.

Oh, and last but not least, Dale Jr. was apparently spotted wearing his cap on backward and minus the Grizzly Adams beard. The Pied Piper of plate tracks is clearly back! OK, I’m exaggerating the impact just a little, but more than a few commentators have noted increased spring in Little E’s step. That can’t be bad, right?

Based on all the above, I’ve tweaked my rankings. I’ve also added the best lines I could find online this morning for each driver:

I’m leery of making any bets today, but Biffle at 30-1 is good value. Heck, run this race 30 times and lots of guys win it, and Biffle is better than lots of guys.

My Yahoo! Fantasy Picks
Group A
I like Greg Biffle with the new Ford engine and give him an edge over Kurt Busch. Plus, I think I’ll need Busch more than Biffle this year, so it’s an easy call: start the Biff, bench Busch.

Group B
I’m glad I didn’t activate Dale Jr.—now I can’t succumb to temptation and burn one of his six remaining starts at a plate race. I like McMurray and Harvick and have nine starts remaining for each, so I’ll gladly take the opportunity to save one of Kahne’s seven remaining starts. He’ll join Brad Keselowski on my bench.

Group C
I like both Regan Smith and Scott Speed today, so I feel good starting Smith and sitting Speed to save Speed’s starts. I don’t foresee needing Smith much this year.

Have at it, boys!