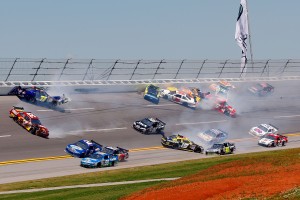 The series heads to the king-size track in Talladega, Ala., the track that provides the most unpredictability on the circuit (Daytona is a close second). NASCAR forces the teams to run a restrictor plate on the carburetor on this 2.66 mile, high-banked track because without it, drivers would reach speeds well over 200 mph, posing an unacceptable risk to everyone near the track.

The problem with capping horsepower, of course, is that it tends to bunch the cars up in packs, and packs increase unpredictability in two ways. First, they produce an intense form of drafting tactics in which the cars form lines two- and three-wide. To get up front, drivers must draft in line and shuffle between the lines to move forward. This means drivers with average skills and equipment have a greater chance running well than they do at non plate tracks.

Second, the packs tend to produce big, demolition-derby style crashes. If one driver in a pack bobbles, surrounding cars have little chance of avoiding him, and carnage results.

It’s clear two of last year’s rules changes have upped overall unpredictability as well: the wave-around and double-file restart rule, and the green-white-checkered rule. The wave-around rule allows many more cars to remain on the lead lap late in a race than before, and the double-file restarts give all of those lead-lap cars a shot at getting a good finish. And the green-white-checkered finish rule runs the lottery-style finish multiple times.

In addition, Talladega’s historical and preliminary data has far less value as a predictor than it does at other tracks. Why? The post-qualifying practice data is pretty much worthless because the cars frequently practice drafting. The qualifying-run and qualifying data has a little value because it gives clues which cars have the most total speed when running solo, but of course during the race the cars pretty much don’t run solo.

There’s a new wrinkle, too: In an effort to spread the cars out somewhat, NASCAR has increased the size of the restrictor plate to allow the cars to make more horsepower. It remains unclear what impact, if any, this change will have on Sunday’s race.

All that said, you can still get a feel for who will run well Sunday—you just have to alter your evaluation process.

Handicapping Talladega
I’ve looked at the qualifying and race-result data from recent races at Talladega and Daytona (including the Shootout and Duels), and I also reviewed the drivers’ average-finish, laps led, and times led statistics. I then refined my top 10 list by applying my subjective evaluations of driver/team ability (e.g., Dale Jr.’s terrific plate-track skills moved him up my list a bit).

I’ll watch practice and qualifying tomorrow and Saturday (primarily to listen for any driver and/or crew chief comments) and update my rankings prior to the race.

My Yahoo! Fantasy Picks
Group A
Given all the unpredictability at superspeedways noted above, I’m looking to save starts for the drivers I’ll likely run nine times at other tracks, but surprisingly, that tactic isn’t coming into play in Group A. I rate Kurt Busch and Biffle tops so far, and they get the nod because I don’t think I’ll need all nine of their starts this year.

Group B
This is where start-saving proves critical. I like Bowyer, Newman and Dale Jr. this week, but I’m pretty sure I’ll need all their starts this year, so they’re riding the pine. I’m gonna load up with Kahne, Harvick, McMurray, and Brad Keselowski. Running Kahne and Harvick is iffy because I think I’ll need a bunch of starts out of them this year, but they’re not my big guns, and I don’t want to hamstring myself by running four bottom feeders from Group B. I think David Reutimann merits consideration, and even Joey Logano as well.

Group C
I’m pretty sure I’ll need nine starts from A.J. Allmendinger, Paul Menard and Sam Hornish Jr. this year, so I won’t activate them this week. Fortunately, I like Scott Speed and Regan Smith at Talladega, so they get the nod.

Stay tuned for my race-preview update this weekend.