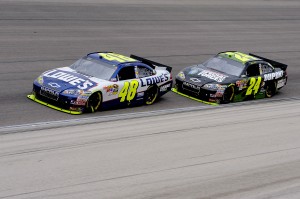 The 24 prepares to blow past the 48. (Photo John Harrelson/Getty Images for NASCAR.)

On Sunday shortly before the race, I spent some time in the “Texas picks” thread in the “Who are your picks for this week’s race?” forum on FantasyNascarPreview.com. The discussion prompted me to revisit my picks, particularly my evaluation of Jeff Gordon. In my Race Preview Update: Texas, I’d bumped Gordon out of my top six due to his relatively poor showing on the Practice 1 speed chart and in qualifying, but I learned in the forum that while he wasn’t particularly good in qualifying trim, he was great in race trim. So, if I’d posted an update to the update, my top seven would’ve looked like this:

That would’ve been a pretty good evaluation. Gordon clearly had the top car throughout the race, and only a late caution and then a big pileup kept him from finishing up front.

Stewart had a great car as well, particularly on short runs, but the same late crash smashed his dreams, too.

Johnson was very strong, though not as strong as Gordon—he finished second, and with a couple more laps likely would’ve won.

Biffle, Busch, Bowyer and Dale Jr. also had good cars. Bowyer suffered a flat tire early that ruined his day, but the other three ran and finished well. 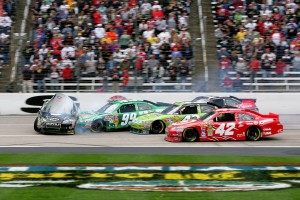 My Yahoo! Fantasy Picks
Group A
I swapped Gordon in for Johnson at the last minute and took a points beat-down as a result. Still, it was a good call. You can’t get results-oriented when a bad-luck event occurs.

Group B
Dale Jr. ran really well and no one on the 88 team screwed anything up—hooray! Bowyer also had a good car, but as mentioned above, suffered some bad luck.

I had Kasey Kahne on the bench, and he came on late to finish fifth. On the other hand, as I wrote in my Update, Matt Kenseth looked bad in the preliminaries, and he didn’t have much during the race, either.

Group C
I started Sam Hornish Jr., and unfortunately his setup was off. He slipped back through the field into the teens, and eventually spun. He did manage to finish 19th (thanks primarily to the big pileup at the end) so not all was lost.

Paul Menard was my surprise of the day. I heard rumblings in the forum that he was good in race trim, and he did indeed climb through the field throughout the day. Alas, he too was caught up in the big pileup.

Maybe my luck will turn at Talladega? Riiight…