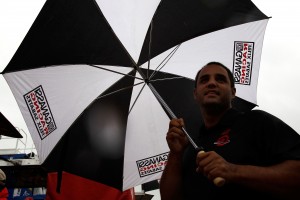 The predictability of today’s tilt in Texas has gone from bad to worse thanks to two factors: weather and tires.

The Weather
As feared, rain moved into the Fort Worth area, wiping out both practice sessions yesterday and threatening the running of today’s race. The elimination of practice yesterday seriously damaged the ability of NASCAR handicappers and fantasy players to identify who will run well because it chops the amount of available data in half. We still have the first practice and qualifying to work with, but the first practice is typically the least valuable of all the preliminaries because the teams work on both race and qualifying setups during that session, and it’s hard for outsiders to know if and when they’re comparing apples to apples when looking at speed charts.

Plus, the rain has undoubtedly washed the rubber out of the track, so if the race does start today, the drivers will face a different track than they did on Friday. And as the race continues, it will change as it rubbers in.

Finally, the weather reports this morning don’t look good. If NASCAR does manage to start the race today, it seems fairly likely rain could pull the curtain closed before it’s gone the distance, and a rain stoppage could give us a wild-card winner. Trivia question: How did Joey Logano and David Reutimann manage to get their first wins last year? Answer: Rain stoppages!

The Tire
The Goodyear Tire Notes section on Jayski.com’s Texas Race Info page indicates the teams are running a different tire than they did at Texas last year. The teams got a little bit of time with the new tire on Friday, but probably not enough to identify the optimum setup tweaks from last year’s notes.

Summary: Add up the lack of pre-race data, the track changes, the tire change and of course the wing-to-spoiler change discussed in my race preview, and you get a pretty cloudy picture.

Handicapping Update
Not So Fast
I liked Mark Martin and Jeff Gordon prior to practice/qualifying, but both appear to be off the pace, particularly Martin. I’m also not as high on Kurt Busch as I was. 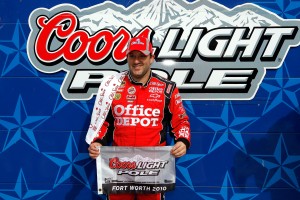 Greased Lightning
Tony Stewart vaulted to the top of my charts on Friday when he ran second in practice and then claimed the pole. This really stands out to me because over the 2+ years I’ve been scrutinizing the pre-race data, Stewart almost never looks very good. He then usually proceeds to out-perform his pre-race numbers during the actual race by a large margin—something his competitors rarely do. I’ve actually been thinking about writing an article titled “The Stewart Anomaly” to examine why this is. Anyway, the fact he looked fantastic on Friday makes him my favorite today, and I’d really be high on him if all the unpredictability factors noted above weren’t in play.

Jimmie Johnson also looks good, and you have to like the history that team has in making adjustments to deal with car, track and tire changes. Greg Biffle looked very good on Friday, too, and I think Kyle Busch, Clint Bowyer and Dale Earnhardt Jr. should make some noise today as well.

Here’s my updated ranking, including the best betting lines I could find Saturday morning on seven sportsbooks:

If this were a typical, relatively predictable Texas weekend, I’d love betting Stewart at 10-1. Given all the unpredictability noted above, however, I’m feeling a little gun shy.

My Yahoo! Fantasy League Picks
Group A
I sure wish I had Stewart and/or Biffle available. I’ve got Johnson and Gordon, and I guess I’ll start Johnson though I’m uncomfortable using one of his allocations in a race with this much unpredictability. If it looked closer between he and Gordon, I’d start Gordon.

Group B
I rate Dale Jr. and Bowyer tops in Group B, so I’m stoked to have them available on my roster. I rate Ryan Newman third, but I don’t have him. Kasey Kahne looks OK, but he’s on my bench. As is Matt Kenseth, who looks terrible and admitted as much in an interview with him I read online. 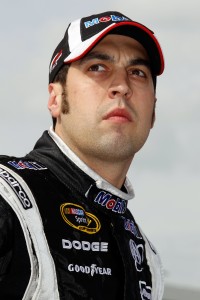 Group C
Sam Hornish Jr. looked great on Friday, especially for a Group C guy—he’ll start second alongside Stewart, and he gets the nod from me, too (duh!). Allmendinger looked solid Friday, but I didn’t like what I saw from Paul Menard. Scott Speed appears to be a good third choice.