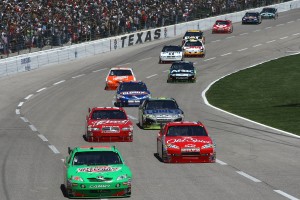 After a month of relatively unpredictable short tracks, the Sprint Cup series heads to the lightning-fast cookie-cutter track known as Texas Motor Speedway (TMS). Fantasy NASCAR players and handicappers can breathe a sigh of relief because the 1.5-mile D-shaped tracks with progressive banking—i.e., TMS, Charlotte, Las Vegas, Atlanta and Homestead—offer perhaps the most predictability on the circuit. Right?

Yes and no. Yes, because the series runs on these tracks nine times a year, providing a wealth of historical data (i.e., the numbers from practice, qualifying and the race each race), and generally speaking, the more data the better. Even better, we have very recent banked-cookie data from the Atlanta and Las Vegas races this spring. Finally, the 1.5-miler is big, and big tracks offer more breathing room on the track and pit road than a short track.

No, because this week we will finally find out how if and how much the switch from the rear wing to the spoiler shakes up the teams’ pecking order. In my article on the spoiler a couple weeks back, the consensus seemed to hold that the spoiler wouldn’t have a big impact, but we really won’t know until it’s in play on a super high-speed track in race conditions. At Texas, the cars will top 200 mph, and that will do the trick.

Handicapping Texas
I’ve examined a range of historical data to get a feel for the likely top performers this week. First I looked at the pre-race and race data for the two 2009 Texas races, then the same data for all the banked-cookies in 2009 and 2010, and finally the data for the most recent banked-cookie races.

Jimmie Johnson tops all my historical-data charts by a good margin, and Hendrick batterymates Jeff Gordon and Mark Martin are second and third, respectively. Here’s my preliminary top 10:

My Yahoo Fantasy Picks
Group A
Johnson and Gordon offer top value, with Martin not far behind Gordon. Don’t worry about saving starts for the Hendrick guys because generally speaking, this type of track is the type you save them for in the first place.

If you’d like to work in a non-Hendrick team anyway, consider Biffle or Kurt Busch.

Group B
Kahne looks tops this week in Group B. After the 9, I’m liking Matt Kenseth, Clint Bowyer, and Dale Earnhardt Jr. Junior is the least strong of these guys in the historical data, but it’s looking more and more like he’s going to outperform his 2009 stats.

David Reutimann, Ryan Newman, and Kevin Harvick also have potential this week, in that order.

Group C
For the second week running, it looks to me like it’s The Sam Hornish Jr. and A.J. Allmendinger Show in Group C. I rate Paul Menard and Scott Speed third and fourth, respectively. but the gap between those two and Hornish and Allmendinger looks too big to consider running one of them.

Stay tuned for my Race Preview Update this weekend. Hopefully we’ll have a better handle on the spoiler’s impact by then (and hopefully it will be nil!).