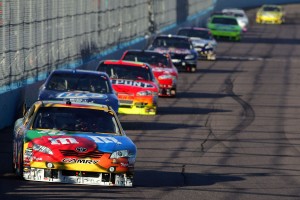 What the… ? Phoenix is supposed to be a relatively predictable race, but the NASCAR Sprint Cup teams have finished with practice and qualifying for tonight’s race in Phoenix, and the results were, shall I say, fairly wacky. A.J. Allmendinger, Scott Speed and Sam Hornish Jr. qualified first, second and third, respectively, while favorite Mark Martin was way off the pace all day.

The cooling track undoubtedly contributed at least a little to the unexpected qualifying results—the drivers who ran late in the afternoon/evening (e.g., Allmendinger, Speed and Hornish), tended to run faster than the guys went out early. Practice and qualifying were run in sunny, hot-track conditions but the race will finish under the lights in the cool desert evening, and that adds to the uncertainty for us NASCAR fantasy players and handicappers. Finally, maybe the spoiler is shaking things up?

Bottom line: It’s hard to tell who is actually fast now, and who will be fast when the track cools. All we can do is work with the data we have.

Handicapping the Race
Not So Fast
I declared Martin the clear favorite earlier this week, but he was off the pace in practice and qualifying. I liked Denny Hamlin if his knee was OK, but it seems likely he won’t run the whole race, and he looks fairly slow, too.

On the other hand, three of my other picks—Johnson, Jeff Gordon, and Tony Stewart—look pretty good. If Johnson wouldn’t have made a big mistake in each of his qualifying laps (e.g.,he did a Dukes of Hazzard-esque power slide off turn 4 to ruin a promising second lap), he’d look very good, in fact.

And I must give Allmendinger the respect he earned yesterday. When I add up his performances in both practices and qualifying, he’s on top. I won’t rate him #1 because, well, he’s still pretty much a new guy, and an Richard Petty Motorsports guy, and a guy with a pretty weak track record. But he’s a legitimate top-10 threat today. Maybe even top five.

Here’s my updated ranking, including the best betting lines I could find Saturday morning:

Given the relative unpredictability of today’s race, I’d stay far away from Johnson at 4-1. The lines on Gordon and Stewart are borderline. I think Dale Jr. is a very good bet at 25-1.

I also like Allmendinger at 100-1; I mean, you don’t win that one very often, but run the race 100 times and he easily wins at least once. I’m not sure what to make of taking him at 18-1 with the field, which includes 23 non-favorite cars. Taking Logano at 30-1 seems reasonable, but a lot closer than Allmendinger at 100-1.

My Yahoo! Fantasy League Picks
Group A
I’ve got Johnson and Martin, and I think Johnson easily gets the call based on his pre-race performances. I also like Jeff Gordon a lot, and to a lesser degree, Tony Stewart.

Group B
I wish I had Dale Jr. and Logano, but I don’t. I do feel pretty good about Ryan Newman and Jeff Burton, though—I’ll start them over Martin Truex Jr. and Clint Bowyer, and it’s not close.

Group C
I’ve got Allmendinger and Sam Hornish Jr., and Hornish is easily second best in Group C. I’d like to start him to save a start for Allmendinger, but the ‘Dinger looks just too good today. Other than them, Michael McDowell looks good, but I don’t know if he’ll run the whole race. Scott Speed qualified very well but stunk in practice. Paul Menard was bad all the way around.

Lesson Learned
During the telecast of the first practice, I heard Larry McReynolds say the teams are running the same tire they ran last year at Phoenix. That makes the race a little more predictable, but the wing-to-spoiler change and the impending hot-to-cool track change increase the unpredictability quite a bit.