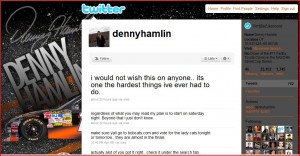 In my Race Preview: Phoenix post, I rated Denny Hamlin really high but hedged by noting my concern for his surgically repaired knee. I’ve been keeping an eye out for any news I can get on his recovery/rehab, and what I’ve found so far isn’t promising.

First, here’s an article written today by Kenny Bruce on SceneDaily.com on Hamlin’s knee. In the second paragraph, the physician’s assistant who reportedly is overseeing Hamlin’s rehab is quoted as saying he’s optimistic Hamlin will be able to run a least some laps and that it’s just a matter of seeing how many laps he can run. In addition, Hamlin’s last two Twitter posts say “regardless of what you may read my plan is to start on saturday night. Beyond that i just don’t know,” and then “i would not wish this on anyone.. its one the hardest things ive ever had to do.”

So, there seems to be a strong chance Hamlin will turn the wheel over to Casey Mears at some point during the race.

And there’s something else to think about: As one poster pointed out in the forums on FantasyNascarPreview.com, NASCAR won’t allow Hamlin to race with any painkillers stronger than aspirin, basically. That means he will likely be in considerable pain throughout the race, and it seems reasonable to speculate that will negatively affect his concentration and, therefore, his performance.

Conclusion: If you’re in the Yahoo Fantasy game, you’re probably better off sitting Hamlin this week. He’s a big gamble, and you shouldn’t need to take a big gamble this early in the season.