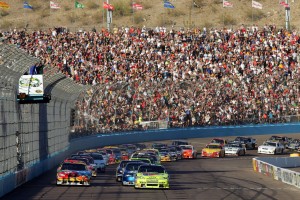 After two weeks of short tracks, we head to Phoenix in the Valley of the Sun. I still consider Phoenix International Raceway (PIR) a short-flat track, but at 1 mile in length, it’s twice as big as Martinsville and Bristol. That in itself increases the predictability of this race compared to the Bristol and Martinsville races simply because there is more room on this track, and more room on pit road. More room means fewer fender benders and cooler tempers. We also have a good amount of historical data for Phoenix because the weather wasn’t a factor there last year and apparently won’t be this year, either (according to Weather.com at press time).

On the other hand, the predictability of Sunday’s race is less than it could be because this race will start during the day and then run into the night. That means the temperature of PIR’s asphalt surface will change a lot throughout the race, and that’ll force the teams to scramble to keep up with their setups. In addition, the speeds at PIR should bring the spoiler into play more so than Martinsville did (though not as much as Texas will next week), and although the general consensus seems to hold that the spoiler won’t turn things upside down, that remains to be seen.

Handicapping Phoenix
I’ve examined the historical data from several different angles to get a feel for the likely top performers this week. First I looked at the pre-race and race data for the two 2009 Phoenix races, then the same data for all the short-flat tracks in 2009 and 2010 (i.e., Phoenix, Martinsville, New Hampshire and Richmond), and finally the data for the most recent short-flat track races.

My conclusion: Mark Martin is the clear preliminary favorite to win on Sunday at Phoenix, and Jimmie Johnson, Jeff Gordon and Denny Hamlin will likely run very well, too. Here are my preliminary top eight: 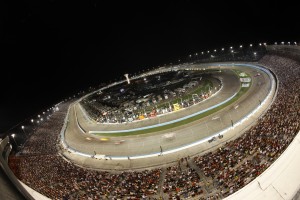 My Yahoo! Fantasy League Picks
Group A
I’m beginning to grow a little nervous about burning up so many of Mark Martin’s starts so early in the season, but I can’t leave him on the sidelines this week—he’s just looks too strong.

I’ve also tenatively tabbed Hamlin over Jimmie Johnson because 1) he’s looks really good, and 2) I like having two different organizations available in case one strikes gold with a set-up tweak. With the spoiler coming, this feels a little more important than usual. However, I am concerned about Hamlin’s knee (he had surgery on it a week ago) and will keep my eye out for any news on his recovery. If I don’t like what I hear, he’s out and Johnson’s in.

If you’re looking to save allocations on these drivers, I think Jeff Gordon and Tony Stewart will provide good value, too.

Group B
Ryan Newman is automatic for me this week, and I feel pretty good about Clint Bowyer as well. After that, though, it gets tricky. Martin Truex Jr. makes me nervous because he’s with a new team this year and that lessens the value of his historical data, but he’s quite strong in the historical data and finished well two weeks ago at Martinsville, so he gets the nod. In the four hole, I’m gonna go with Jeff Burton—he’s not strong in the historical data, but he was so strong at Martinsville I think he’s worth the gamble this week.

Kasey Kahne, David Reutimann and Brian Vickers are also on my radar, and while Dale Jr. isn’t particularly strong in this week’s historical data, it’s looking like he might be a new man this year and could therefore defy my expectations and run really well this weekend.

Group C
It looks to me like it’s The Sam Hornish Jr. and A.J. Allmendinger Show this week in Group C. That again gives me representation by two different organizations, and it saves Paul Menard for future deployments. Menard and Scott Speed are my third and fourth choices, respectively, and if you really want to get wild, take a look at Robby Gordon. He rounds out my top five, and his luck is bound to change soon, right?

OK, that’s it for now. We’ll know a lot more after qualifying and practice. Stay tuned for my Race Preview Update this weekend.