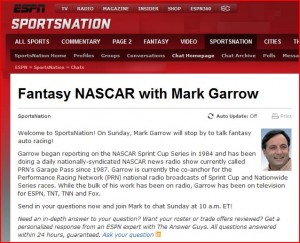 I’ve picked up another excellent info source from the forums over on FantasyNascarPreview.com: Mark Garrow at ESPN SportsNation Chats. According to his bio, Garrow has had a lengthy career reporting on NASCAR stretching back to 1984. Each week, he apparently starts a chat session a few hours before the NASCAR Sprint Cup race. He fields many questions from fantasy players looking for advice on their picks, and the kind of downright wacky stuff you get in live chat with the masses (e.g., “yo blondie will you marry me”).

But he also shares his crew chief notes during these chat sessions, and that’s the real treat for us fantasy players and handicappers. In Sunday’s session, I counted notes on 12 chiefs/teams/drivers, and each note typically quotes the chief’s opinion on not only their driver’s car, but which of the other cars he likes as well.

Click here to see last Sunday’s chat, and scroll down to his post at 10:38 AM to see the first crew chief note. I plan to head back there just prior to the upcoming race in Phoenix to see his notes before the green flag waves. If you’re having last-minute trouble picking between a couple drivers, Garrow’s crew chief notes might give you the info you need.