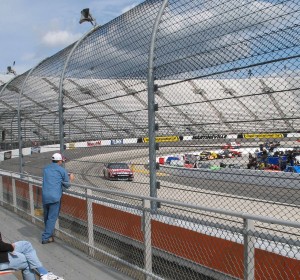 Carl Edwards navigates turn 4 in practice for the October 2008 race.

Rain washed out qualifying, but we did get to see three solid practice sessions, and I’m ready to fine-tune my Race Preview picks from earlier this week. There were a few surprises for me, but for the most part my preliminary read on this race was on the money.

Handicapping the Race
I tabbed Mark Martin and Jeff Gordon as my favorites, and they’ve lived up to the billing so far. In happy hour, they were both fast and happy with their cars, and I think they are the clear favorites. It’s pretty much a tossup, but I’ll give a very slight edge to Gordon because he starts 11th while Martin is back in 16th.

Denny Hamlin and Juan Pablo Montoya look strong, too, but surprisingly, Jimmie Johnson was not quite as fast as expected, and the TV announcers suggested during happy hour that he is not in love with his car. I’d still rate him in my top 10, but he’s no longer in my top 5.

Ryan Newman and David Reutimann were not as fast as I expected, and Jeff Burton, Jamie McMurray and Clint Bowyer all elbowed their way into my top 10.

Betting Lines
At press time this afternoon, Bodog has Martin at 16-1, and that’s good bet even with the threat of rain looming tomorrow. Montoya is also worth considering at 18-1. Bodog has Gordon at 6-1, and I don’t see much value there.

The lines are currently closed everywhere else, but I’ll see if some reopen later and try to post an update before race time tomorrow.

Edit: An hour after I wrote this, Bodog’s lines on Martin and Montoya shifted to 14-1 for both. They’re both at 15-1 on The Greek and WSEX.

My Yahoo Fantasy League Picks
Group A
As discussed, I think it’s just about a dead heat between Martin and Gordon. I might go with Martin just because I think everybody else will be running Johnson, Gordon or Hamlin. Regarding Johnson: If you have the 48 paired with Gordon, Martin, Hamlin or Montoya on your roster, I recommend taking the opportunity to sit Johnson and save one of his starts.

Group B
As I mentioned above, my two “locks” in Group B, Reutimann and Newman, have been off the pace. I’m sitting them in favor of Dale Jr. and Clint Bowyer, and I’m very happy with those two picks given what I saw and heard in practice. If you’ve got Jeff Burton on your roster, you’ve got to start him—he looks stout.

Group C
I’ve got AJ Allmendinger and Paul Menard on my roster, and the ‘Dinger looks significantly faster, so he gets the nod. If you have Sam Hornish Jr. available, give him strong consideration—I score him tops in Group C through the three practices.

Lessons Learned
In my Race Preview, I said the chance of equipment failure at Martinsville was higher than on other tracks due to the heavy brake usage at the end of each straightaway. In light of some info I gleaned from one practice broadcast and a pre-race article, I’m going to retract that. It appears that the braking systems the teams run at Martinsville are so well engineered and beefy now, they are no longer a weak link.

I also learned that Martinsville is not as susceptible to temperature changes and sun-vs-cloud changes as I thought. The straightaways are asphalt, but the corners are concrete, and concrete does not absorb nearly as much heat (or absorb it as quickly) as does asphalt. The teams therefore don’t have to chase the track as much with their suspension setups as they would if the corners were asphalt.