Racing at Martinsville is frequently door-to-door, as this shot from the October 2008 race attests.

Now the series moves to the very short, very flat track at Martinsville. Like Bristol, performance is more difficult to predict at this paperclip-shaped track than at a big track such as Atlanta for a number of reasons (i.e., the cramped pit road and stalls, the multi-car wrecks, the traffic and the tempers).

And Martinsville offers even less predictability than Bristol. For one, the drivers essentially drag race their super-powerful yet heavy machines down the straightaways and then jam on the brakes over and over and over again, and that’s hard on equipment, particularly the brakes. In addition, the quality and quantity of our historical data for this race are even less than what we had for Bristol. Like Bristol, Martinsville is one of a kind. You can (and should) look at the 2009 data from three other short, flat tracks on the circuit—i.e., Phoenix, New Hampshire, and Richmond—but the value of that data is limited because those tracks are no where near as similar to Martinsville as, say, Vegas, Texas, Homestead and Charlotte are to Atlanta. Also, last year rain wiped out four practices and one qualifying at the two Martinsville races, which severely limited the available data.

The weather will likely further degrade our pre-race data: At press time, Weather.com says rain might mess with practice and qualifying on Friday. On the plus side, Saturday and Sunday should both feature partly cloudy skies with temps around 60 degrees F, and that consistency is good for predictability. 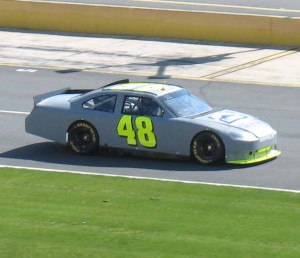 Taken during the testing session today at Charlotte, this photo shows the new spoiler on the 48. Also note the fins on the rear window and trunk.

However, it’s probably canceled out by the new spoiler. The spoiler will make its first appearance at Martinsville, and that introduces a new wild card into the equation. Its effect should be minimized at Martinsville because the track features the slowest speeds on the circuit (I think), but don’t discount it entirely.

Should we throw our hands up and pick driver names out of a hat ala Daytona and Talledega? If I were betting on a driver to win this race, I’d once again need really good odds (i.e., 10-1 or better), and when I turn on the TV Sunday, I’ll be ready to accept any catastrophes the racing gods decide to deliver down upon my fantasy league team. But that said, cars that have recently run fast at Martinsville and the other short-flats still have a significant edge on lesser cars.

Handicapping Martinsville
I’ve sliced and diced all the practice, qualifying and race data from all the short-flat races in 2009. I also filtered out the data from the early-season races, leaving just the fall data, and I looked at the data from just the two Martinsville races. Several names repeatedly rose to the top during this process, and I feel fairly comfortable picking this preliminary top five, in this order:

Predictably, the Hendricks organization is well represented (Dale Jr. should run decently, too). I would’ve ranked Hamlin #2, but the right-front tire woes he and all his teammates suffered last week at Bristol make me a little nervous, as does his knee problem.

My Yahoo! Fantasy League Picks
Group A
According to my top-five list above, I should tab Martin and Gordon, and I guess I will. This early in the season, I typically like to get two different organizations represented in Group A so all my eggs aren’t in one basket, so I wish I could run Hamlin instead of Gordon. But I can’t due to my misgivings about Hamlin (see above), and besides, Gordon typically qualifies well at Martinsville, so he might get me some qualification bonus points.

Group B
David Reutimann and Ryan Newman are locks for me this week, but after that it’s a pretty tricky. I think I’m going to go with Clint Bowyer and Dale Jr. Kasey Kahne should be in the mix, too.

Group C
A.J. Allmendinger is the clear favorite in Group C this week, but after that it’s pretty close between Sam Hornish Jr., Paul Menard, Scott Speed, and (gasp) Robby Gordon. I’ll probably avoid Sideways Sam and Angry Robby Gordon because you just know they’ll find trouble at Martinsville. I think Menard deserves the call over Speed. I’ll just have to fight off my instinct to protect Menard’s allocations because it’s too early in the season to focus hard on that.