Now the series moves to the very short, steeply banked track at Bristol. Performance is more difficult to predict at this bullring than at a big track such as Atlanta for a number of reasons. Pit road and the pit stalls are extremely cramped at Bristol, which tends to lead to more delays, accidents and general mayhem than at bigger tracks. The drivers really lean on the brakes over and over again on this track, and that’s hard on the equipment. It’s easy to get caught up in someone else’s wreck at Bristol, and when the race goes green for awhile, the front runners quickly catch the tail end of the field, so they don’t get a peaceful, spread-out run for very long. And, the crowded conditions tend to promote beating and banging, which raises tempers.

In addition, the quality and quantity of our historical data for this race are less than what we get for a 1.5-mile banked cookie cutter such as Atlanta. On the Sprint Cup circuit, Bristol is one of a kind. You can (and should) look at the 2009 data from Bristol the two other shortish, banked tracks on the circuit–i.e., Dover and Darlington–but the value of that data is limited because those tracks are no where near as similar to Bristol as, say, Vegas, Texas, Homestead and Charlotte are to Atlanta. 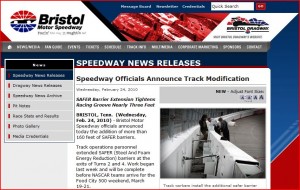 A very recent track change further decreases the predictability. On Feb. 24, Bristol Motor Speedway announced it was extending the SAFER barriers along the exits of turns 2 and 4. This will tighten up those exits, and it remains to be seen how that will affect the racing. The track has come under fire for the modifications it made in 2007 to the track, which widened things a bit and led to less beating and banging. The tightening will probably bring back more fender-on-fender action, but all we know for now is that the track is significantly different than it was last year, which makes last year’s performance numbers less valuable. Click on the image to the right to read the Speedway’s full news release.

Finally, at press time the extended weather forecast at Weather.com predicts slightly varying weather in Bristol on Friday and Saturday, and a 40% chance of rain on Sunday. Changing track conditions reduce the value of the pre-race data because it forces teams to chase the track with their set ups, and we might even get a rain-shortened race with a wild-card winner.

So, if I were betting on a driver to win this race, I’d need really good odds, and I’ll be mentally preparing myself for a bad day in the Yahoo fantasy league. But that said, cars that have recently run fast at Bristol and the other short-banked tracks still have a significant edge on lesser cars.

My Preliminary Favorites
I compiled, sorted and examined all the practice, qualifying and race data from all the short-banked races in 2009. Then I filtered out the data from the early-season races, leaving just the late-season data. Finally, I also looked at the data from just the two Bristol races. Several names repeatedly rose to the top during this process, and I feel fairly comfortable picking this preliminary top 10, in this order:

Johnson and Martin stand above the field so far this week, with Newman and Kyle Busch not too far behind. I’m also keeping my eye on Bowyer: He currently falls just outside my top 10, and because it appears Richard Childress Racing has finally found some speed this year to pull closer to the performance levels of the top-echelon teams, I’m curious to see how he runs in practice and qualifying. Marcos Ambrose is on my radar as well. He ran pretty well at Bristol last year, and at the September race in Dover.

Hopefully the weatherman is wrong and we’ll get three days of consistently decent weather so we can collect lots of good pre-race data. Stay tuned.